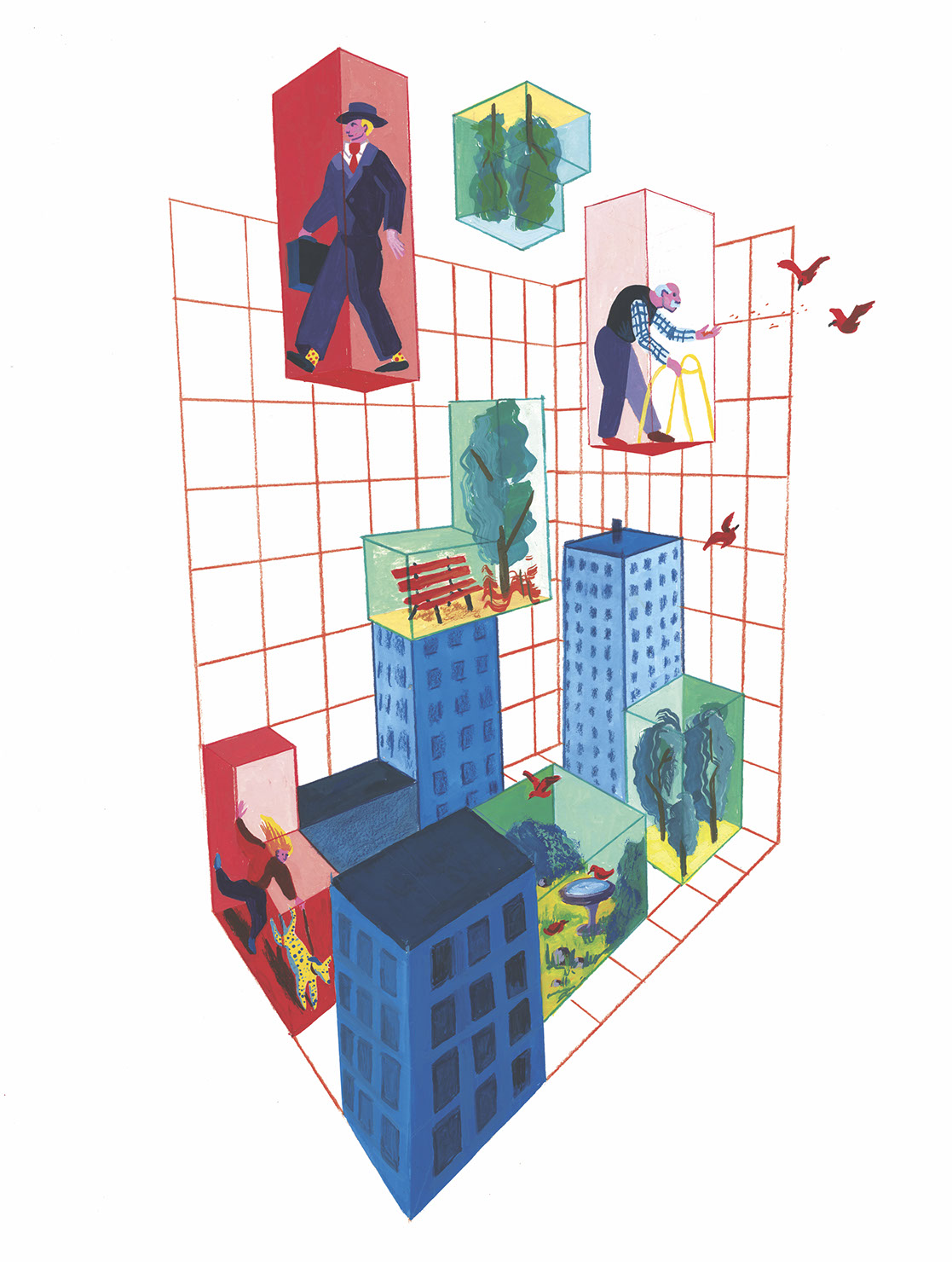 What do the cities of Detroit (US),  Adelaide (Australia),  Dresden (Germany) and Osaka (Japan) have in common? Effectively they have all lost a significant amount of their inhabitants since the mid-twentieth century.(1) This process can be referred to as urban shrinkage: ‘a densely populated urban area or city that faces significant population losses over a longer period of time’.(2) Furthermore, this process seems to have accelerated in the past ten years.(3) Many cities and urban areas from all over the world could have been added to the example above. Urban shrinkage is a process that is influencing many citizens world-wide by changing the built environment they live in. It is an important topic that has often been discussed within the discipline of urban planning. Interestingly, however, the focus has been mainly on causes and explanations of urban shrinkage rather than on policies that offer  options on how to cope with it. This is evident in the fact that ‘urban planners have still little background experience or recourse to deal with it’.(4) How can urban planners deal with this process and reinvent declining cities, and what role can new concepts such as ‘urban greening’, ‘right-sizing’ and ‘public participation’ play? These concepts have recently emerged or gained more prominence within the context of urban shrinkage in the US and are promising in dealing with the process.

Why do cities shrink?

The negative consequences of urban shrinkage are not only spatial, but also psychological, economic and social in nature. The first and most prominent outcome is vacancy. In Detroit (Michigan, US)[1] vacancy leads to an interrupted pattern of streets missing one or more houses.(6) This corrodes the image of the neighbourhood given that people often have negative experiences with a pauperised built environment. Moreover, drug addicts or beggars often use abandoned buildings to live in, which might contribute to the fact that inhabitants feel alarmed. Although vacancy is a spatial phenomenon, urban shrinkage therefore also generates psychological effects. Secondly, tax revenues decrease due to the outward movement of people. The city needs money in order to invest in strategies dealing with urban shrinkage, but faces a decline in tax revenues due to the outward migration of its citizens. In the American Rustbelt, ‘many cities have shrunk by more than half from their mid-twentieth century peak undermining the tax base needed to pay for a sprawling infrastructure of utilities, roads, and transportation services’.(4) Thus, a lack of tax revenues in shrinking cities generates financial issues. Thirdly, socio-spatial segregation often emerges when a city is in decline. Citizens who can afford migrating to suburbs or other cities will leave, while those less fortunate are forced to stay. This creates a pattern of relatively poor people living in the shrinking areas, whereas the relatively rich people live in the suburbs. Although vacancy might be the most obvious spatial outcome of urban shrinkage, several social, cultural, economic and psychological dimensions can be linked to this process as well. Summarized, ‘the shrinking city phenomenon can thus be seen as a multidimensional process, comprising cities, parts of cities, or entire metropolitan areas that have experienced dramatic decline in their economic and social bases’.(7) Through spatial interventions in shrinking areas several spatial, psychological, economic and social issues can be addressed.

Dealing with urban shrinkage in the US

’Urban planning in the United States focuses almost exclusively on controlling and shaping the effects of growth and is ill-equipped to deal with cities or neighbourhoods experiencing sustained disinvestment and depopulation’.(7) In other words, in order to cope with urban shrinkage, a new approach in urban planning is desirable that not necessarily focuses on growth, but also on urban shrinkage if that is the case in a city. There seems to be a first step towards acknowledging the fact that planners should plan for decline instead of growth. The concepts of ‘right-sizing’, ‘urban greening’ and ‘public participation’ can be regarded as promising in this context. Right-sizing can be viewed as a strategy that is currently emerging within the context of urban shrinkage. The central idea of right-sizing is ‘to avoid the trap of growth-oriented planning by restructuring the urban landscape around mixed-income, mixed-used clusters’.(4) Furthermore, it is a ’watchword for the perceived mismatch between shrinking city populations, physical and infrastructural plans, and budgets’.(4) In this sense, one could argue that this strategy can be seen as a paradigm shift. Rather than focusing on growth, the emphasis should be placed on the improvement of existing parts of the city.

Another more content-focused definition emphasizes right-sizing as ‘stabilizing dysfunctional markets and distressed neighbourhoods by more closely aligning a city’s built environment with the needs of existing and foreseeable future populations by adjusting the amount of land available for development’.(8) Thus, there seems to be consensus about the fact that right-sizing is a strategy that does not necessarily assume growth, but rather looks at the context of the city. An example of a relatively successful implementation of right-sizing policies can be seen in Philadelphia (NTI Program), where the demolition of abandoned houses, the implementation of affordable housing strategies, the involvement of political leaders and the redevelopment of vacant properties led to a successful right-sizing approach to urban shrinkage.(8) However, right-sizing plans have also produced disappointing results. Evidence from Detroit, Flint, Rochester, Saginaw and Youngstown in the US shows that right-sizing lacks ‘the utopian modernism and Keynesian interventionism of urban renewal, and the progressive equity-oriented environmentalism idealized by its proponents’.(4) Thus, right-sizing is neither successful nor unsuccessful. Nonetheless, the fundamental idea of right-sizing, abandoning the idea of growth, is promising. In addition, it is the local context of a shrinking city that decides what actions are needed in order to apply right-sizing in a city in decline. Moreover, an important role can be played by urban planners and policy-makers. If they can leave the habit of assuming future growth and develop new plans that are able to restructure and renew cities, right-sizing could be a success.

Another promising example of a more practical approach to urban shrinkage is urban greening. Generally we can refer to urban greening as a strategy to deal with urban shrinkage that focuses on spatial, green solutions that improve the urban environment.(8) In this context, one could for example think of the creation of parks, waterways, working farms, floodplains and forests. In doing so, negative outcomes of urban shrinkage such as vacancy and the pauperization of the built environment are being dealt with. As a result, greening these vacant and pauperised areas in cities provides opportunities for recreation. Families can have a picnic in the park, or sports can be performed. Furthermore, it increases property value, reduces stormwater runoff, and increases access to healthy local foods.(8) More importantly, urban greening can also increase and improve social networks within neighbourhoods by engaging residents actively into the planning process.(8) This might enhance the ‘community feeling’ in a city. Thus, urban greening can be regarded as a very positive tool that is used to deal with deal with urban shrinkage. However, some difficulties do exist. The most critical one is funding. As outlined above, the tax revenues of shrinking cities have declined due to the outward migration of citizens. Therefore, city councils have less money to invest in (greening) projects like the NTI Program in Philadelphia. By establishing public-private partnerships around urban greening projects, this issue could potentially be solved.

The ultimate approach to urban shrinkage: right-sizing within the local context

Shrinking cities can be found all over the world embedded in different local contexts. This has important implications for policy-making. It is the local context that should be taken into greater consideration to cope with the issue of urban shrinkage. Furthermore, it is important that the assumption of future growth of cities, which is often present in local policy-making, can be left behind. As we have seen in the case of the US, urban planners often assume and plan cities for growth despite this not being the case. Therefore, a shift from a ‘growth paradigm’ to a ‘right-sizing paradigm’ is needed. People adopting the right-sizing strategy are able to cope with urban shrinkage by creating new policies that can deal with vacant land and pauperised neighbourhoods. As a practical example of right-sizing, urban greening is very promising. It has the potential to lift places to a higher level of environmental quality by improving the built environment through green solutions. Moreover, public participation has the potential to yield more legitimate outcomes of planning processes by involving residents actively into the planning process. Their often strong commitment can greatly help improve neighbourhoods facing decline. By making use of the three presented concepts, the quality of shrunk cities and neighbourhoods can be increased, thereby improving people’s lives by providing a pleasant urban environment to live in.

In order to make public participation a real success, a more equal distribution of power in the planning process is needed.